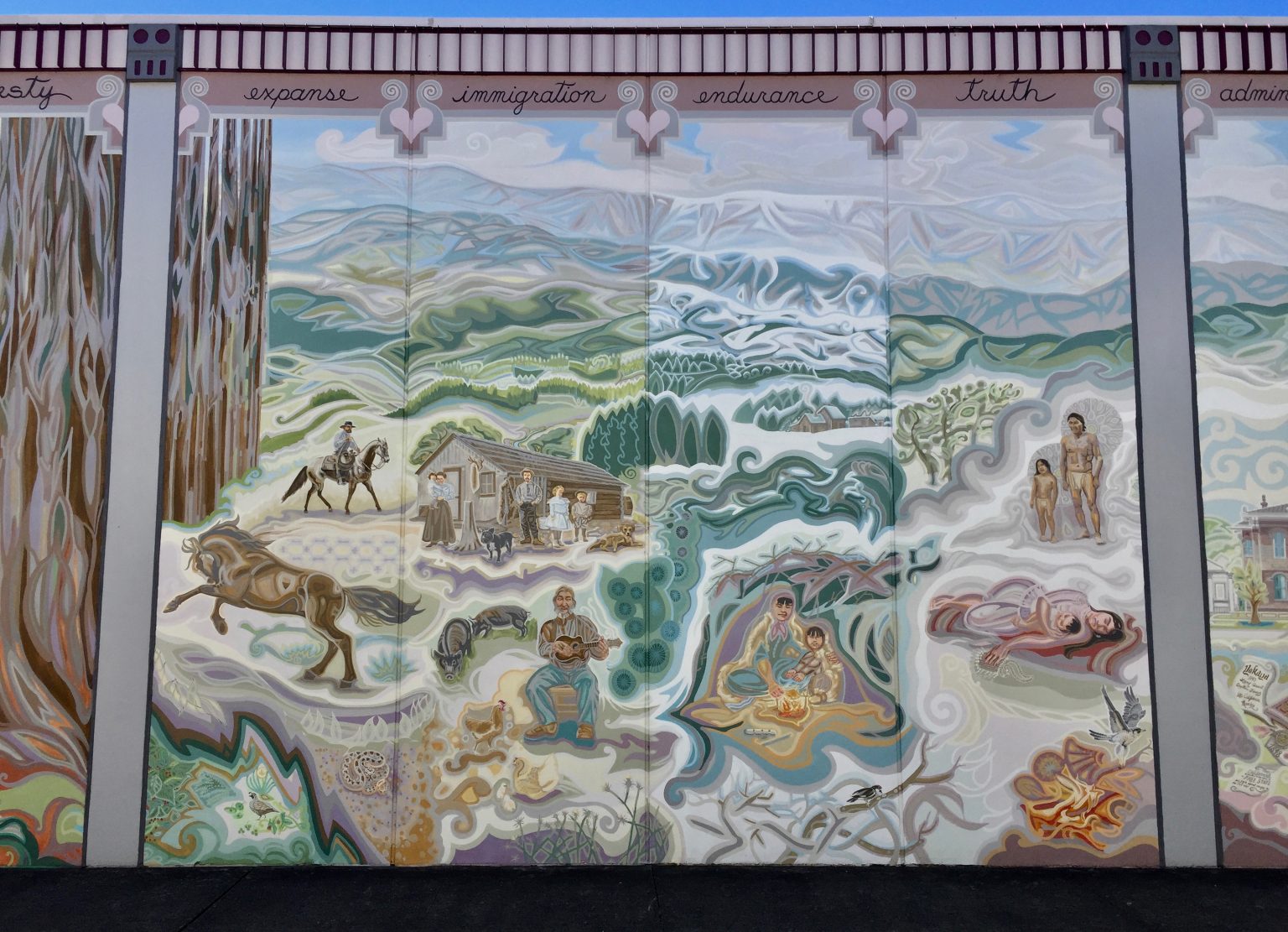 One of the smallest mind-blowing bathrooms on the planet.

Imagine yourself seated--nay, enthroned--at the center of a 16th century palace, with an oval hall before you. Behind and above is a canopied throne.

This is the crest I developed for the family, with its water theme (Renaissance dolphin and waves),
as well as the French royal fleur-de-lis.

The level of detail in this series of murals is VERY high, as can be seen in these close-ups
of the garden panel (left) and the dome (right).

A little pixie looking through the lightswitch aperture before installation...

Landscape has become one of my favorite subjects, and this mural started it all.

My long time friend Tundra Tom Faess invited me to paint a mural on the headquarters of his company, Great Canadian Ecoventures, in Yellowknife, capital of Canada's Northwest Territories. 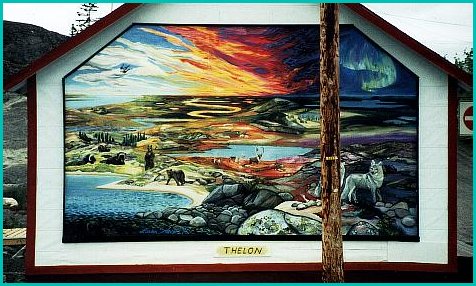 Painted in exterior latex housepaint, the picture combines day, sunset and night; spring and fall; and depicts the open tundra, with arctic wolves, caribou, grizzlies musk-ox, and a gyrfalcon. 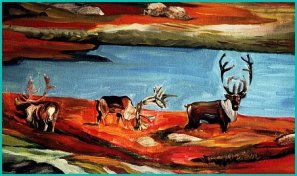 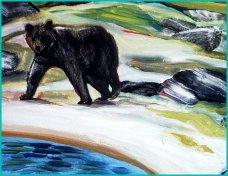 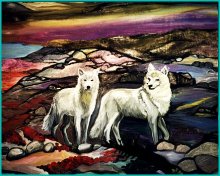 A pure and passionate love of that land is what inspired this painting. I have spent time in that wild place, and its silence, its beautiful colors, its sweet perfumed air, its rock and water will never leave my heart.

Over the years and after having small children, I've become fast and efficient ( though still dedicated to leisure and sensory indulgance ). This project was complete in just two weeks, leaving enough time for me to fly out to the base camp in Tom's float plane on a gorgeous sunny day that was so windy the mosquitos were all blown away and so inviting that I walked right down the sandy beach and into the clear arctic waters of Whitefish Lake.

That mural painted for a place I loved so much was destroyed, but I had the opportunity to paint a new one. Read the Tundra Love Story. 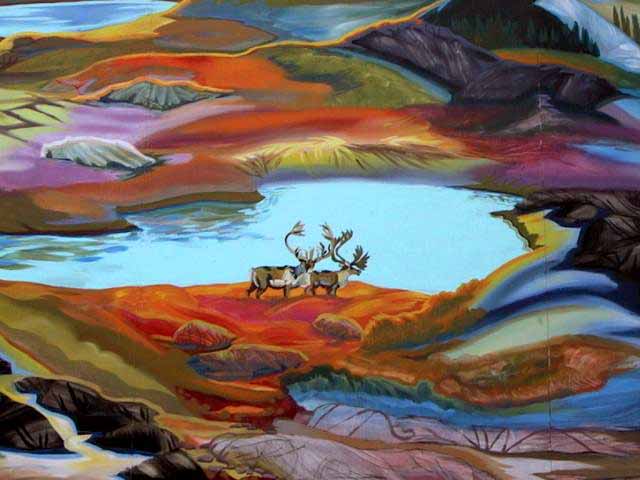 Pictures for this latest mural project will be up soon!

This mural was painted on a food court booth at the Houston Livestock Show and Rodeo. It is done in acrylic on panels and depicts a nostalgiac remembrance of a bygone era. 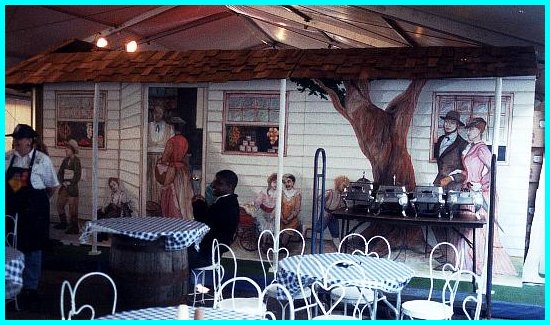 The stories are in the details, from a little girl and her doll watching a man whittle, to boys playing with marbles and a hoop, a couple on their promenade, two immigrant women talking and more. 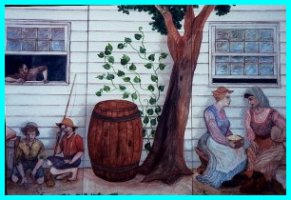 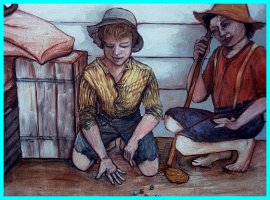 The panels are 8 ft. high, so the figures are nearly life-size. 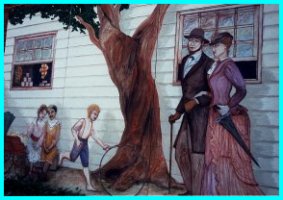 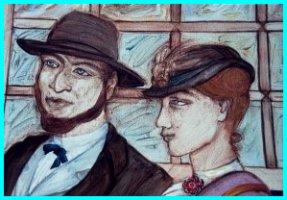 I enjoy creating facial expressions. It can be a tricky business, though, since the slightest brush stroke can change the emotion tremendously! 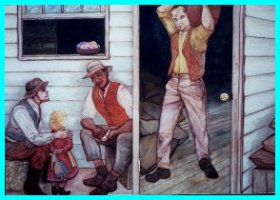 The man in the center, above, seen through an open door, is painted on the real door, closed. (You can see the hinge and doorknob.)

This two-sided business sign for Buchanan's Native Plants, in the Houston Heights, needed not only to be bright and fresh and attract attention, but also to be ACCURATE in its flora, given the nature of the establishment

.Not just any old flower from my imagination would do, no matter how sumptuous or other-worldly it might be. 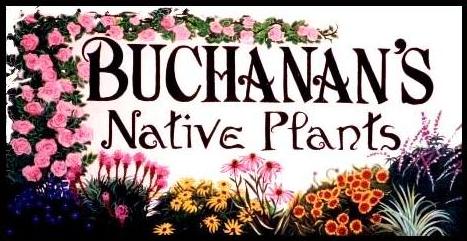 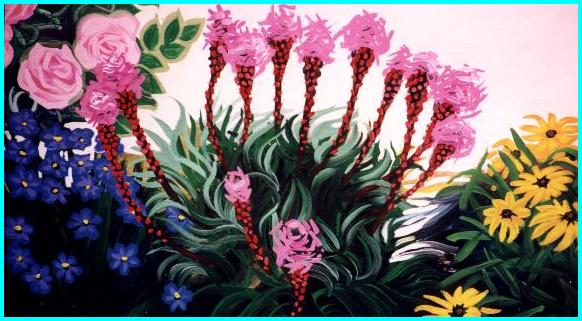 The subtleties of the Liatris may be seen here.

This project was both a very large mural AND a multiple business sign. It's bright colors transformed the rather plain cinder block building in Yellowknife, NWT, Canada.

The lettering along the base of the building says " Best selection in the NWT",
so the concept was a stylized tundra scene,....scattered with furniture, of course!

In the details below, notice the musk-ox (left) and the caribou (right).

Other imagery on the sign represents and honors the ethnic groups of Canada's North:

I was pleased to work with Manuel and Marta Jorge and to help give form to their vision.

This project came at the very end of one of my visits and time was so short that I had ensconced myself with a pot of coffee in their big work space to paint all night. When they left me, the sign was bare except for the letters.

When they came down before breakfast in the morning to see how much I could possibly have finished, or if I might be curled up in exhaustion, they were shocked and also very happy...It was done!

(I don't know how it happened. Actually, I do. The muse visited me, as she always does....at some point!)

After I painted a few commercial trucks in Canada, it dawned on me that living in the artcar capital of the world ( Houston, Texas), I really ought to paint my own vehicle, which is a 1985 Toyota Corolla.

A car like this doesn't have a huge surface area, but if there's anything an artist knows how to do, it's pack in the imagery.

Thus, the driver's side depicts Texas, including the Hill Country (with a galloping white stallion), the desert and cacti of Big Bend, and the Rio Grande valley. 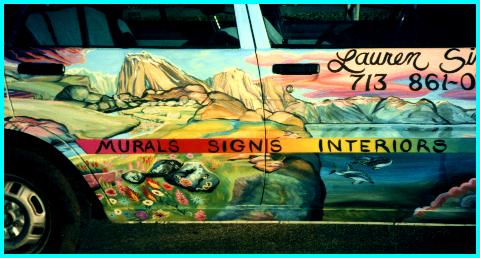 The hood is painted with a palace scene...

...and the roof has my black eagle, wings spread across the galaxies. 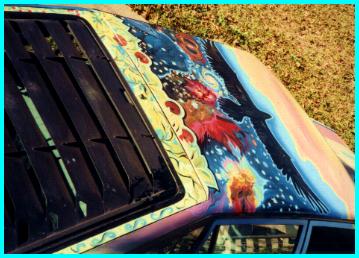 The car was painted entirely by brush, with exterior latex housepaint over a universal primer applied to the lightly sanded car paint.